It's Cover Reveal week! Thanks to the talent of so many wonderful authors, our anthology is nearly complete and will be released on December 11th. But today, we are excited to share the cover with you and won't make you wait any longer! 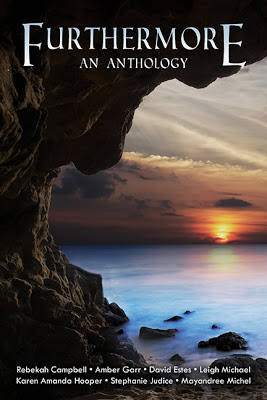 A first date, a lottery, treachery and deceit. Sometimes fate has other plans. Sometimes there’s more to tell.

In Furthermore: An Anthology, eighteen original stories take you on a journey through worlds here and beyond. From the depths of the earth to the embrace of the sea, your favorite series continue. Prequels, alternative views, and new scenes give readers a chance to experience more than originally told.

Including stories from Rebekah Campbell, Amber Garr, David Estes, Leigh Michael, Karen Amanda Hooper, Stephanie Judice, and Mayandree Michael. And most importantly, in honor of those who lost the battle and those who continue to fight, all proceeds from this anthology will be donated to cancer research and support.

SURPRISE VISITOR - Emily has never been a fan of surprises but Eric has something up his sleeve to change her mind. (The Darkness Through The Light Series)

GETTING TO KNOW THE HEAVIES - The two Sullivan bodyguards are still human beings underneath it all. And everyone has a weakness. (The Darkness Through The Light Series)

PEOPLE CHANGE - When Eric asks his dad a question about his mother, it’s time to go back to where it all began and then went so badly wrong. (The Darkness Through The Light Series)

COLD FEET - Kain witnesses Eviana’s deceit on their wedding day and is forced to deal with the consequences of her behavior. (The Syrenka Series)

RIFT - Daniel encourages the group to make a detour to the Grand Canyon, as the distance between the friends begins to rival the great ravine. (The Syrenka Series)

DISCOVERY - Leila’s first encounter with her psychic mentor is nothing short of memorable. (The Leila Marx Novels)

HUMAN RESOURCES – Blake finds a new job while Mac finds a friend who reminds him of home. (The Leila Marx Novels)

THE RUNAWAY- TAWNI’S STORY - After learning of her parents’ treachery, Tawni leaves home seeking to make amends for their transgressions. (The Dwellers Saga)

THE LIFE LOTTERY- A STORY FROM YEAR ZERO - With the survival of the human race on the brink, there’s only one way to decide who will be saved in the underground caves: The Lottery. (The Dwellers Saga)

FATE: Experience Annabelle’s struggle to fulfill the ABA Prophecy in a new light through the parting words of Adrian, Aurelia, Blake, and Lady Katherine. (Annabelle’s Story)

The Sound of Love - Glimpse into one of Nathaniel’s previous lives and see how his soul mate reacts when tragedy strikes. (The Kindrily Series)

MUIRNE’S MELODY--To escape her master’s vile desires, Muirne flees into the snow-swept night, finding a green-eyed stranger and a mystical destiny. (Saga of the Setti Series)

FALL FROM GRACE: Warped by centuries of darkness, the creature Sveigja plots to capture Clara as his queen. (Saga of the Setti Series)

We would like to extend a HUGE thanks to Claudia at PhatPuppyArt for donating the artwork and to Alexandra Shostak for donating her time for the cover design. You ladies are amazing and we are all so grateful for your contribution!

If you are interested in promoting the release or reviewing an ARC, please visit HERE to sign up.

To find out more about the authors and their stories, please check out THIS POST.

October Recap & a Fresh Start
It's hard to believe I haven't posted a soapy sundays edition since the last Sunday of September! Weeks just slip by me, especially this month when I'm doing NaNoWriMo, and I found myself a few weeks behind in my Y&R episodes, eek!
First of all, I love the new intro! It's about time the cast appearing in the opening credits have had their photos updated, and the actors who are getting more airtime have been included. I don't even fast forward through it anymore, lol.
Hot Hot Heat
﻿
Ronan and Phyllis...Oh. My. God. She was feeling the chemistry, Ronan, you could tell that. They are absolutely smoldering together! I don't think I could've resisted him, so kudos to her. I was happy that by the end of the month, she gave in to her feelings, well maybe I should say lust. :D Ronan is there for Phyllis in ways that Nick has never been and never will be. So why is she so dead set in trying to win him back? He doesn't deserve her! Just let the two of them split up once and for all.
She pleads for Nick to forgive her. Why? He remarried her, knowing she has a huge tendency to act emotionally rather than rationally...but he remarried her anyway!! Now he's divorcing her. He ditches her everytime she does something that disappoints him. He told her she DISGUSTS him!! Why are you trying to win that back?! Oh yeah, and now he's hooking up with YOUR SISTER! Enough said. Obviously, I'm Team Phonan, lol. :D
Greatest Line of Dialogue Ever
Kevin and Chloe figure out the obvious--that Daniel and Heather are seeing each other. When Chloe confronts Daniel and he denies it, Chloe says, "Liar liar, hipster jeans on fire." Epicly funny! Wish I had thought of it first, heehee!
I'm still a few episodes behind, but I've heard Heather's character might be written off or recast or something. I really hope not--I love Jennifer Landon as Heather; I don't want to see her go! She's played Heather the best out of all the actresses who've been cast in the role. She makes Heather seem normal and not awkward. Plus, she has nice father-daughter chemistry with Paul.
Supercouple ﻿
Awww...Victor and Nikki together again. Although, Nikki, you're right to worry about the future. As much as I hate to say it, it won't be long until Victor hates you again. But I'll enjoy seeing you guys plan your 148th wedding (thanks Adam for that gem of a line, lol) and being all lovey dovey for a while.
Descent into Madness
Ah Sharon. I could just scream in frustration--how could she burn down the ranch??? Does this mean they're rebuilding the set? It's iconic...it's been there since before I was born! If they are gonna redo Victor's house, then I hope it's somewhat recognizable with some touches of the original house. I know this sounds crazy, but that's the one set I never wanted to be drastically changed. :/ Sharon really needs to pay for that, lol.
I wish Adam would just stay away from her. Why is he helping her out anyway to the detriment of his marriage? Thank God Chelsea found out the truth--I can't believe, though, that I would be okay with my new husband helping out his ex and letting her stay on our property. What's up with that? I don't get his motives. I spent the last few episodes Sharon was going to burn down the cabin. And maybe Adam and Chelsea's house, too. She's a loose canon right now. I don't know if she should be trusted to be in that cabin alone honestly.
Loss of a New Newman
I knew Adam and Chelsea weren't going to stay happy for long, which I understand because if, as a viewer, you want your favorite couples to get air time, then they have to have conflict and drama. I was so close to tears when Chelsea told Adam she lost their baby after Summer plowed into their car. Summer is so immature, blaming Phyllis for the accident. "If I hadn't been so upset with you," she whined to her mother, "that accident never would've happened." (I'm paraphrasing). Please! Take some responsibility for your actions, Summer. I'm not really sure why the character was recast already, but recasting seems to happen a lot when the children of legacy characters are aged suddenly. I wonder how many times this character will be recast.
So, I'm sad Adam and Chelsea lost their baby; that's really heartbreaking. And Adam is forcing distance between them by refusing to talk about their loss and his insistence with ingratiating himself back into Sharon's life. Sharon needs to take care of herself and stop relying on men to come save her. In my opinion, Sharon's character has really been done a major injustice by being written this way. I hope she's built back up--although it's been a really long time since I've liked her character because I've grown to love Phyllis so much.
I'd really like to see Adam and Chelsea work their problems out, but on a soap, you never know what's going to happen. That's the beauty of watching Y&R. :D ﻿
By ~Jennifer~ at 8:20 PM No comments:

Email ThisBlogThis!Share to TwitterShare to FacebookShare to Pinterest
Labels: soapy sundays, the young and the restless 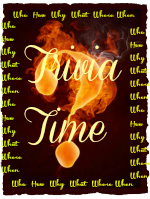 Hey everyone! I'm taking part in Debdatta Dasgupta Sahay's new Sunday Trivia meme over at b00k r3vi3ws Click on the link so you can get involved, too! Every Sunday all of the participating bloggers will ask trivia questions that are related to books, authors, characters, and movies based on books. The answers along with new questions will be posted the following Sunday. Try it without Googling, lol. ;)

1. In Mary Shelley's book of the same name, Frankenstein is:
a. violent and terrifying monster
b. a mad scientist who created a monster
c. a village in the Alps

2. A poltergeist is a ghost that:
a. haunts cemeteries
b. possesses people
c. makes noise

3. In Haiti and West Africa, a corpse brought back to life is called a:
a. zombie
b. vampire
c. monster

5. What is the difference between demons and ghosts? (Essay question! Just kidding! :D)

Answer: Ghosts are the spirits of people who have died, but demons are spirits who have never existed in human form.

Since I'm doing NaNoWriMo, I'm focused on that right now, and will take off this month from Sunday Trivia. :)