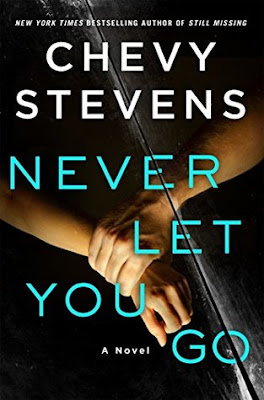 Eleven years ago, Lindsey Nash escaped into the night with her young daughter and left an abusive relationship. Her ex-husband, Andrew, was sent to jail and Lindsey started over with a new life.

Now, Lindsey is older and wiser, with her own business and a teenage daughter who needs her more than ever. When Andrew is finally released from prison, Lindsey believes she has cut all ties and left the past behind her. But she gets the sense that someone is watching her, tracking her every move. Her new boyfriend is threatened. Her home is invaded, and her daughter is shadowed. Lindsey is convinced it’s her ex-husband, even though he claims he’s a different person. But has he really changed? Is the one who wants her dead closer to home than she thought?

With Never Let You Go, Chevy Stevens delivers a chilling, twisting thriller that crackles with suspense as it explores the darkest heart of love and obsession.

Never Let You Go is the first book I've read by Chevy Stevens, and won't be my last. I've noticed the covers of her novels over the years and have always been captivated by them, making me wonder what stories lie within. She is an excellent writer, ramping up the tension at the right moments and causing you to question what you think you know about the characters. I loved it.

Never Let You Go is a gripping thriller that delivers a punch to the gut. Told from Lindsey and Sophie's (Lindsey's daughter) POVs as well as alternating between the past and present, I wasn't sure at first how all of that was going to work. However, I thought including scenes from the past was genius because they illustrated just how much danger Lindsey and Sophie were in with Lindsey's ex-husband (and Sophie's father), Andrew.

Andrew operates in an insidious way, and his subtle threats wouldn't have had the same impact if Lindsey had simply described her past. The reader needed to see and experience the various methods Andrew used to make sure Lindsey was under his control and miserable. During those scenes, Lindsey's suffocation from her controlling husband was palpable - I experienced those feelings right along with her.

I couldn't imagine having a father like Andrew, so when he gets out of prison, it's understandable for Sophie to desperately look for anything redeeming about her father despite everything her mother has told her about him. Still, I wanted her to stop making what I considered to be dumb decisions that could put her and her mom in danger.

I also thought it clever for the author to include other characters that had the potential to be a threat to Lindsey and Sophie. My only issue was that there might have been too many, and I started figuring out what was going on before I wanted to. I wanted to be kept guessing right up until the very end. I still highly recommend Never Let You Go for those like me who are constantly seeking new thrillers to sink their teeth into.

Trigger Warning: There's a scene where a puppy is harmed but not injured or killed. 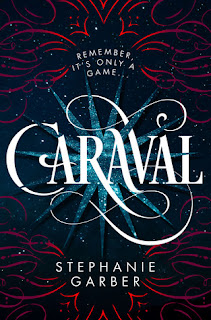 
Scarlett Dragna has never left the tiny island where she and her sister, Tella, live with their powerful, and cruel, father. Now Scarlett’s father has arranged a marriage for her, and Scarlett thinks her dreams of seeing Caraval—the faraway, once-a-year performance where the audience participates in the show—are over.

But this year, Scarlett’s long-dreamt-of invitation finally arrives. With the help of a mysterious sailor, Tella whisks Scarlett away to the show. Only, as soon as they arrive, Tella is kidnapped by Caraval’s mastermind organizer, Legend. It turns out that this season’s Caraval revolves around Tella, and whoever finds her first is the winner.

Scarlett has been told that everything that happens during Caraval is only an elaborate performance. Nevertheless she becomes enmeshed in a game of love, heartbreak, and magic. And whether Caraval is real or not, Scarlett must find Tella before the five nights of the game are over or a dangerous domino effect of consequences will be set off, and her beloved sister will disappear forever.

Welcome, welcome to Caraval…beware of getting swept too far away.

I was super stoked when I was approved for Caraval on NetGalley. Like jumping up and down excited because I had a strong feeling this was going to be an epically awesome story, and my instincts were right. As a matter of fact, when I was 20% into the book, I loved it so much I went to the store and bought a copy.

I was entranced by Caraval just as the main characters Scarlett and her sister Tella were in the book. The rich, well developed world building made me feel like I was really there, experiencing the game along with Scarlett. It's a magical place where nothing is as it seems. How can I tell you how spectacular this novel is?? I'm trying to describe it but am failing miserably. You'll have to read it. Please, I beg of you.

Caraval is a debut novel with incredible writing, and I have a feeling there will be more to come, not just from Stephanie Garber but also from the world of Caraval. I'm looking forward to every future word.