I'm with the Band ~ Part II

Wow, I've been pretty much slacking here with my writing lately! With the lovely weather, animals, kids, laundry, and a multitude of other responsibilities, I don't get left with a lot of time to breathe! But here I go, back on the ball again!

Though so many positives came from band, there was also a downside to my time as a cornet player--I totally sucked. Really and truly. I didn't think that practicing would help, and so I didn't. Hardly ever. Now, however, I realize how wrong I was and had I practiced a lot more than what I did, I could have become a better player. Maybe even great.

Now my sister on the other hand oozed with natural talent. Her flute was like an appendage. She just knew how to use it and use it gracefully and beautifully. She had crazy talent. Still does, though I haven't heard her play in forever and don't even know if she still plays or not. She didn't even have to work at it, and I don't remember her practicing much. When she did, though, it wasn't really practice. It was more like honing her skill.

I was crazy jealous! I remember when I was ten years old, and it was Christmas. My aunt and uncle were at our house, and I played a song for them--I don't remember whose idea it was for me to play. I had just begun band. I messed up one or two notes and tried my best to hold back my tears. It didn't work, and I needed to be alone. Off to my bedroom I went and cried for a while. I always have been much too sensitive.


The problem is that even now I have a bad tendency to avoid doing things I'm not good at even if the objective is to become better. I am impatient and want to be perfect right off the bat, but how often does that happen to us with anything we want to do? Anything worth doing takes work. Even if you have natural talent for something, you still work hard to keep improving more and more.
I just have to remind myself what I want won't just fall into my lap. I have to put myself out there, even in what feels like a vulnerable spot. I have to remember I do have a natural talent to hone--it just wasn't the cornet for me!
Part III coming soon!
By ~Jennifer~ at 3:05 PM 2 comments:

Email ThisBlogThis!Share to TwitterShare to FacebookShare to Pinterest
Labels: discussion


In February, I received the Lovely Blog Award by Mel from Journey with Words   Thanks for your support Mel! :D 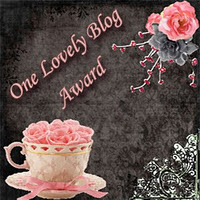 My 15 winners are... (In no particular order):
Jami from Okinawa Paranormal
Sarah from Bookish Sarah
Amy Lignor from The Angel Chronicles
Cassandra from Cassandra's Reviews
Katie from Call Me Crazy
Sarah from YA Paranormal and Bookworm Mom
Mia from The Muses' Circle
Jennifer from Some Like it Paranormal
Mariska from mariska's books and reviews
Nikki from Fiction Freak
angel6171 from Books and Movies
Kindlemom from My Guilty Obsession
ClaireLouise from Claire Reads
Lisa Shafer from A Writer's Blog
Lea from **LC's Adventures in Libraryland**

Congratulations everyone! I love your work...keep it up! :D


I just recently sold my cornet to my good friend's brother. My twenty-year-old cornet! How did it get to be so old? I remember getting it when I was ten and in the fifth grade. I have such a sentimental attachment to that instrument, and what's really hysterical is that I asked if I could still "visit" it once in a while. Not to play it, but just see it and remember the many years of my life spent in the band. Wow, I'm the very epitome of "band nerd!"

The other day, I happened to find a picture my dad had taken of me marching in the Homecoming parade one year, and that memory tugged at my heartstrings a bit! So many awesome benefits came about for me once I joined the band. It's where I cemented my friendships that had begun in elementary school and junior high. Many of my wild and funny memories came from being in band (some sharing of these may come later!). It served as a haven for those of us who didn't feel like we fit in anywhere else in high school. We belonged there and could feel comfortable being our genuine selves. I was and will always be proud to be a band nerd!

I must say I still have nightmares, however, where I forget my band locker combination, or I'm supposed to be in the halftime show but my instrument is broken or missing. Then there are the nightmares where I'm marching in the halftime show and have my instrument, but I forget where to go next. It feels so real sometimes that it'll take me a minute upon waking to remember I'm not in high school anymore and haven't been for over ten years! It's funny how these kinds of dreams still plague me after all this time. I guess you can take the girl out of the band, but you can't take the band out of the girl.

Email ThisBlogThis!Share to TwitterShare to FacebookShare to Pinterest
Labels: discussion