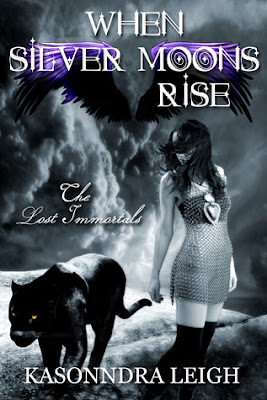 Facing an unstable future, Chela Prizeon leaves Castle Hayne and crosses over to enemy territory in pursuit of Faris--the boy of royal blood who is cursed by a bitter rival. But soon Chela learns that he has been taken deep into the treacherous frozen prisons--a majestic, but deadly place where people enter and are never seen again. To find the boy she loves, Chela must join forces with one of her greatest enemies. And even though she pulls strength from the good in her powers, she finds herself drawn to the dark side's temptation as well.

Narrated from both Chela's and Faris's point of view, this enchanting sequel to When Copper Suns Fall will take them on a voyage into unknown lands, where the dark, twisted, and revengeful wait to make this their most dangerous journey ever.

This book was an incredibly well done sequel! The first one had so much going on it was hard to grasp everything I needed to know, and there were so many secrets revealed it took a lot to keep up. But I love the mix of genres the author gives us dystopian plus paranormal. I'm jealous I didn't think of it first, and I'm still reeling from everything that's happened. This book was action packed from start to finish!

The story continues not too long after the events at the end of the first book, but this time the narration is split between Faris and Chela's points of view. Faris was a mystery to me with a lot of secrets last time around, and I was excited to see things from his perspective and learn more about his background and who he really is. He has to be strong to endure the torture he's under while Chela is making her way to rescue him.

Chela is a strong female lead, which I always admire, and she takes risks to protect the people she loves. Sometimes she will make a decision that I can see leading to disastrous consequences, but she does the best she can. From the beginning to the end of the book, I don't think she had one moment of rest - there was always action involving her. My favorite Chela characteristic is that she always looks for the good in people, and I believe that helps guide her through the most difficult times she has faced. I really love that about her.

There's something about Seth that's really magnetic - the fact that he's a bad boy helps! In books I read, I can't help but fall for guys like Seth, and I couldn't get enough of him. Every chapter he was in was my favorite. :) It's really crazy, too, because as much as I love Seth even with the things he's done, I still adore Faris, too. They couldn't be more different, but there are aspects of both of them that are really attractive.

I was completely stunned by the ending - I won't give anything away, but I will say I'm anxiously waiting to read book three! 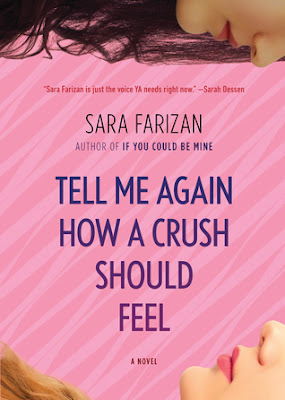 
High-school junior Leila has made it most of the way through Armstead Academy without having a crush on anyone, which is something of a relief. Her Persian heritage already makes her different from her classmates; if word got out that she liked girls, life would be twice as hard.

But when a sophisticated, beautiful new girl, Saskia, shows up, Leila starts to take risks she never thought she would, especially when it looks as if the attraction between them is mutual. Struggling to sort out her growing feelings and Saskia's confusing signals, Leila confides in her old friend, Lisa, and grows closer to her fellow drama tech-crew members, especially Tomas, whose comments about his own sexuality are frank, funny, wise, and sometimes painful.

Gradually, Leila begins to see that almost all her classmates are more complicated than they first appear to be, and many are keeping fascinating secrets of their own.

Tell Me Again How a Crush Should Feel, Sara Farzin's second novel, is a much different story than her first, If I Could Have You. While IICHY was well written, it was painful to read because I felt the situation was a hopeless one. On the other hand, TMAHACSF  was light and funny, and I couldn't stop reading it. I didn't want it to end even with the painful and awkward moments. I love this book so much!!

Leila is a high school student with parents who are Persians and hold traditional values. Her parents are from Iran, and I really liked reading about the different expressions they have in conversation and their customs. Leila's older sister, Nahal, follows what their father wants for her, but Leila is torn between what she wants and what her father wants, worrying that if she doesn't do what he wants, she won't have his love. Her fear is compounded by the fact that her family comes from a country where homosexuality is illegal.

I really liked how the characters in this book aren't what they appeared to be on the outside. What you see isn't what you get because they're much more complex than that. One of my favorite characters was Tomas. He's honest and realistic and someone I'd like to know in real life. Saskia was sending out confusing signals! I couldn't figure out if she liked Leila back or what until the end.

TMAHACSF is a light, easy read with diverse characters, a compelling story, and heart. You'll learn about Persian culture, and this second offering from Farizan is vastly superior to her first.