The Woman in the Mirror by Cathryn Grant ~ #BookReview 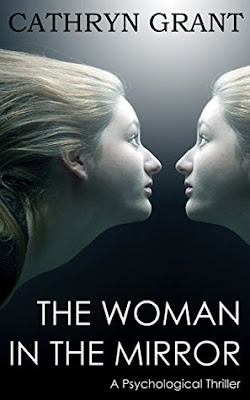 
Noreen Palmer describes herself as sweet and responsible, but she can’t stop lying — about why she destroyed the mirror, about her broken love affair, about the things that happened in her bungalow perched on a cliff above the ocean.

When Alexandra Mallory and Jared Brady rent rooms in her precariously situated home, the danger of falling over the cliff is the least of their fears.

Alex is drawn to both Jared and a strange man lurking around the bungalow, but determined to steer a wide path around her unstable landlord. Soon, Noreen’s escalating threats force Alex to uncover Noreen’s secrets and right a terrible wrong.

Alexandra Mallory isn’t like other women — she gets rid of people who make the world a dangerous place.

I devoured The Woman in the Mirror! I hated having to put it down when I was forced to do something like sleep, lol. These characters were a train wreck I couldn't look away from, and I was so anxious to see what they would do next that I flew through the pages. The dynamic between them was so tense, I felt it could snap at any moment, and while none of the characters have redeeming qualities, they're definitely interesting to read about.

At first glance, Alexandra (Alex) seems like a typical, normal young woman, but I quickly recognized her for what she truly is - a sociopath. As awful as she is, she does pull it off well, I've gotta give her that. This woman's thought processes are scarily skewed. She does a weird personality-mirroring thing that isn't obvious right away but puts her victims at ease to where they don't question her true motives. It even took me a little bit to catch on to it.

As much as I didn't like Alex, I was fascinated by her. The way she hurt others to benefit herself boggled my mind. I have no idea how she sleeps at night. I also have no idea why so many men fell all over themselves to have a chance to be with her. What's so great about her? Is her aloofness a turn-on because she isn't emotionally needy? Alex's past is revealed slowly throughout the novel, which I liked because knowing her history is essential to understanding who she is in the present and how she got to where she is. It was also annoying how full of herself she is and how she kept describing herself as so gorgeous and so in shape and blah blah blah. Get over yourself, girl!

Then there's Noreen, the girl who placed the ad looking for roommates. Unlike Alex, I could see right away that she has so many issues it isn't even funny. I doubt I would have stayed after the crazy stunts she pulled, but then again, Alex is also unhinged, just on a different level. Instead of advertising for two roommates, Noreen should have been honest and asked for the instant boyfriend and best friend package she actually wanted, people who would be completely okay with the fact that she's unstable and clingy. I truly believe Alex still would have responded to that kind of in-your-face-honest ad.

I felt bad for Jared at first, knowing he had no idea what kind of women he was shacking up with, but then he fell for Alex the instant he saw her and my sympathy for him went out the window. He's supposed to be practicing Buddhism and freeing himself of earthly ties, yet he wanted to tie himself down to Alex. He was way too smug about his meditation and yoga practices not to mention the fact he gave up a high paying job for a less complicated, less materialistic life. Dude, give up your flashy car and expensive clothes, then come talk to me.

I did think that Noreen's behavior toward him was unacceptable. She wouldn't take no for an answer and insisted on throwing herself at him every chance she got. She's guilty of sexually harassing him! While not as aggressive as Noreen, Jared did become obsessed with Alex, and I couldn't understand why. I suppose he didn't want to face facts.

I know it sounds like I didn't enjoy this novel, but that couldn't be further from the truth. Part of The Woman in the Mirror's appeal for me was how awful these characters were. It was entertaining and interesting, especially from a psychological perspective, to dissect their faults and behavior, plus wonder what awful thing they'd do next.

This is an exceptionally well written novel but may not be for everyone, depending on whether you're able to read about characters you don't like. If you're okay with characters who aren't redeemable, then you'll likely enjoy The Woman in the Mirror.

According to Goodreads, this appears to be the first book in a series. Is there more story to tell about Alexandra? She isn't someone you root for, not really, so I'm wondering what the next book will be like if there is one. I do think there's more story about her that can be told, and I'd definitely read it.