Review ~ Larimar: Gem of the Sea by Christine E. Schulze 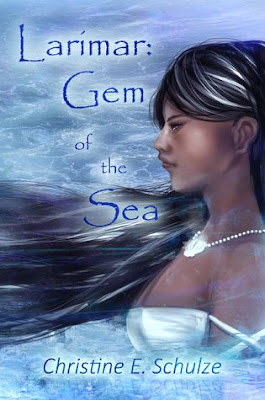 
Captain Michael Biekert is notorious for being the youngest captain to sail as much as he has, charting discoveries of new lands and species. He's also notorious for landing his men in adventures they hadn't counted on--adventures involving cannibalistic mermaids and such.

When Michael decides to search for the legendary underwater city of the Larimar people, he doesn't account for the adventure that follows. Rescued from shipwreck by a mysterious, beautiful young lady who walks on water and carries a singing sea shell around her neck, he soon finds himself reunited with an old friend once though lost to him and fighting to save her people from an ancient evil.

I received a copy of this story from the author in exchange for an honest review.

I was immediately drawn into this story--Michael's character played a large role in that. He's brave and puts the safety of his crew before his own, and I really admired that about him. He gave up a life of luxury as a prince to become an explorer. I wanted to know about their past adventures before the one they embark on in this story. They sounded exciting and dangerous and would make for awesome reading!

Natalie was also a character I loved. She was dreamy and mystical, and I really appreciated the relationship between Michael and Natalie because it was different and special. I did find myself rooting for them to get together; I just couldn't help myself! I'm a sucker for romance. :)

This story was beautiful, a little dark, and magical. I loved all of the elements that were incorporated into the telling, and I highly recommend reading this. It was completely original and extraordinary. :D


Larimar: Gem of the Sea, is a story from The Legends of Surprisers Books II and III, published 2010.


Christine E. Schulze has been creating books since she was too young to even write them in words. Her collection of YA fantasy books, The Amielian Legacy, is comprised of series and stand-alone books which can all be read separately but which weave together to create an amazing fantasy. She hopes to inspire readers throughout the world with these books by publishing in both traditional and electronic formats to make them available to all readers.

Christine has published several stories with Calliope and Kalkion magazines. She has also published several Fantasy and Christian Fantasy books which are available at various online retailers, as well as publishing several eBooks via Writers-Exchange.

Her latest and most exciting ventures include her publications with Old Line Publishing, Bloodmaiden and Lily in the Snow, as well as The Chronicles of the Mira with Writers-Exchange in both paperback and electronic forms. She is also the newest and proudest author at Book By You, a publisher specializing in personalized books, and is happy to release Song Quest, Black Lace, and Dark Embrace with them.

Christine currently lives in Belleville, Illinois in her first and most thrilling apartment.