The Many by Nathan Field ~ #bookreview @NetGalley 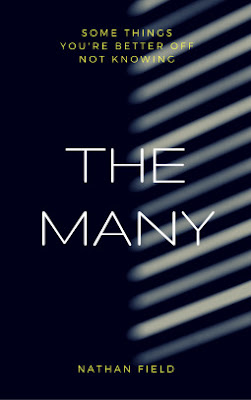 Karl notices something odd about his sister the morning after a blind date. A coldness in her manner; nothing anyone else would notice. Suspicious, he confronts her about the date but she turns nasty, accusing him of taking a perverse interest in her sex life.

When he next sees her, months later, she seems back to normal, until a harmless comment provokes a sudden, violent response. As her mental state fluctuates, Karl seeks out the man she dated just before her personality began to change, convinced she is suppressing a painful memory from that night. But what he discovers is something far more sinister, and pervasive, than he'd ever imagined.

Strictly for adult readers, THE MANY is the first book of a series that explores the dark side of the world we live in, and sheds light on a shadowy evil that is both disturbing and eerily familiar.

Look out for Nathan Field's new novel, THE MANY: ENCORE, coming soon.

The Many's beginning was pretty good and hooked me right away. I loved the way it started out all high tension-y with a first date that I just knew was going to go crazy badly. The problem with this story was that the middle was difficult to get through, but I didn't skim it in case I missed something important. Luckily, the last third of the book picked up momentum again.

The Many begins with Stacey, who's out on a first date with a doctor. At first he seems like the man of her dreams, but soon his knowledge of details of her life that she never told him creep her out and cause her to want the date to end early. The next day, Stacey's brother, Karl, notices she isn't acting like herself.

We are then introduced to Isobel and her daughter, Dawn. Isobel also goes on a date with someone who seems to be out of her league, this time a woman. Like Stacey, Dawn notices her mother comes back from the date not quite right. The similarities between Stacey and Isobel's dates are creepy, and both Karl and Dawn know instinctively that something is very wrong. They end up joining forces to investigate what's going on.

I was glued to my Kindle! Field knows how to keep his audience in suspense from the beginning and at the end, but the plot in the middle drags on and could have been fleshed out better. I kept reading, however, because I HAD to find out what was going to happen next. I didn't want to miss something important.

What terrified me the most about The Many was how the characters changed overnight, yet only their closest loved ones could tell the difference in them. Also, no one else really took Dawn and Karl's concerns seriously.

What I loved most is that vital questions about human behavior are explored. Without giving any of the plot away, I will just say it'll have you thinking about the factors that go into how we as a society decide which human behaviors are acceptable or not acceptable. And who has the right to decide which is which?

I'm SO excited a sequel is coming out. While this book has an ending without a cliffhanger, there is definitely room for more story to be told, and I'll be there for sure.