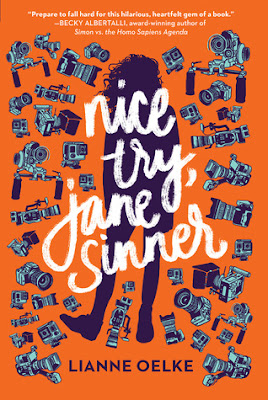 Recently expelled from high school, Jane Sinner grudgingly enrolls in community college, a situation made slightly more bearable when she joins a student-run reality show. House of Orange is her chance to start over—and maybe even win a car (used, but whatever)—and no one there knows what she did in high school. What more could she want?

Okay, maybe a family that gets why she’d rather turn to Freud than to Jesus. But she’ll settle for using HOO’s growing fanbase, and whatever Intro to Psych can teach her, to prove to the world—or at least viewers of substandard TV—that she has what it takes to win.

Before I get into my review, I want to share a cool thing that happened. For some reason my NetGalley ARC of Nice Try, Jane Sinner wouldn't download. I checked to see if the book was available to borrow through my Overdrive app, but it wasn't! There was an option to recommend they buy it, however, so I clicked the box. A few days later I received an email that the Ohio Digital Library purchased the book and would notify me when I could borrow it.

Anyway, I wanted to share this experience with you because this is the first time I've received concrete evidence that a library bought a book I recommended, and I'm really happy about it!

Now on to the review. I loved this book! Nice Try, Jane Sinner takes place in Canada, and it's always a nice change of pace when books are set outside the U.S.

After her expulsion from high school, Jane enrolls in community college and finds out a student-run reality show, House of Orange, is going to be filmed there. The show is still looking for participants, so she signs up while fudging a few facts about herself. She doesn't think ahead and by doing this, sets herself up for the possibility that the people around her will find out she lied about her identity.

I did my best to read Nice Try, Jane Sinner from the POV of a teenager, but here and there my mind would drift to see Jane as I see my own teenage daughter. For instance, Jane has ultra conservative religious parents, and at first it annoyed me that she referred to them as simply "the parents," but I got over it when I remembered that's how I referred to my own parents.

It was for Jane and her parents to have fundamental misunderstandings of each other. Her parents didn't "get" her intentions and behaviors when, as the reader, I could see where she was coming from thought I didn't always agree with her decisions. They were disappointed she wasn't doing exactly what they expected of her. I was dying to step in and mediate between her and her parents! On the other hand, she has an amazing and close relationship with her younger sister that made me happy to see.

This is one of the best books I've read tackling teenage depression. As a former teen who suffered from depression, I could relate to Jane and was impressed by how accurately Oelke treated the subject matter. I can't recommend Nice Try, Jane Sinner enough whether you're a teen or an adult.


Thanks for visiting Donnie Darko Girl!