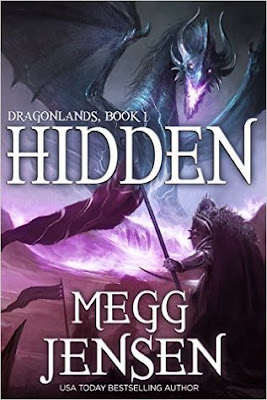 Source: Copy for review from the author

The first novel in a USA Today bestselling series from Megg Jensen!

Control the dragons. Rule the realm.

The mystery enshrouding Hutton’s Bridge is as impenetrable as the fog that descended at its borders eighty years ago. Each year, three villagers enter the mist searching for answers. No one ever returns.

Then a dragon falls from the sky to the town square, dead—the first glimpse of an outside world that has become nothing more than a fairy tale to Hutton’s Bridge. Except to Tressa.

Tressa grew up with Granna’s stories of the days before the fog fell. When Granna dies, leaving Tressa without any family, Tressa ventures into the fog herself, vowing to unravel the foul magic holding Hutton’s Bridge captive.

What she discovers beyond the fog endangers the lives of everyone she loves.

For a short period of time, I was a bit turned off from the fantasy genre. I still liked it, but it was overshadowed for me by dystopian and contemporary novels. Hearing so many incredible things about Megg Jensen's books, I jumped at the chance to review Hidden and am so happy I did. This story was awesome and well told - not only did I love it so much I couldn't put it down, but it also renewed my interest in the fantasy genre.

The prologue drew me in right away and immediately made me want to know what was happening in the village of Hutton's Bridge. The unique plot captured my attention - why the fog surrounds the village, the fact that no one comes back once they enter the fog, and the dangers that obviously lie in wait in the fog. The mystery and suspense heightened my enjoyment of Hidden. I liked that the chapters were short, and the way they ended made me want to start the next right away.

I loved the characters! I wish we could have had more time with Granna, Tressa's grandmother, but her presence was so strong throughout the story it didn't seem like we had lost her. Granna was the leader of Hutton's Bridge, and though not everyone agreed with her decisions, she was revered as the oldest member of the village who had the most knowledge of the time before the fog enshrouded them. Though she was in the book for a short time, she most definitely left her mark!

Tressa and Bastian, the main characters of Hidden, have been through a lot of heartbreak, and I wanted them to be together. I had hope they could find their way to each other though the customs of their village were what was preventing them from becoming a couple. Tressa is brave and full of heart. She listens to her instincts and strives to save her people no matter the cost, even if it means she must sacrifice herself. Bastian is just as brave, and I love how the two of them fit together like they are meant to be together. Their love is beautiful.

I haven't read many books with dragons, and in this book, I can't stress enough how the dragon scenes were so awesome and well done. Though I knew there would be dragons, there's a huge twist revealed that was original and had me excited! I never saw it coming!

A few scenes in Hidden aren't appropriate for younger readers. Due to this content, it's definitely for mature readers, but the scenes are tastefully done. This is the first book I've read by Megg Jensen and won't be the last. I'm looking forward to diving into her other series but most of all, I'm excited for the second book of this series!