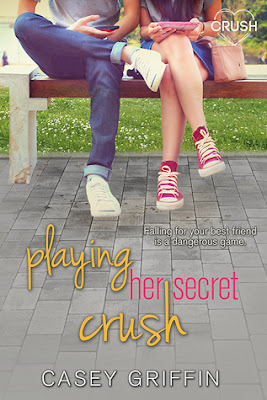 But then Alex asks her to help him find a date?!

Alex has been living life in the fast lane, but he's ready to slow down—with a girlfriend. The last person on earth he’d consider? The girl his brother developed serious feelings for before he died: Katie. The only way Alex is going to get over Katie is by falling for someone new. And who better to help him find his new crush than the girl he can’t stop thinking about?

What can possibly go wrong?

Playing Her Secret Crush was a cute story with a synopsis I couldn't resist. The fact that Katie and Alex are gamers had a lot to do with my interest in reading this book, I must confess. Plus I just love a good friends-to-lovers story!

Playing Her Secret Crush is told in third person alternating between both Katie and Alex. I've read some reviews of this book in which it's mentioned that knowing both characters' feelings made the ending of the book too predictable, and I'm afraid I have to agree.

Katie feels like she comes in last for everything with family, friends and school. She knows her father didn't fight to share custody of her, and that's where much of her insecurity lies; however, not much else is done with this knowledge. I think it could have been explored further because it played a huge role in Katie's unhappiness and her desire to change herself.

Instead of taking time to grieve his brother, Alex is busy living the way he thinks his brother would want him to by taking risks and becoming a player. His risk taking is out of such desperation, however, that it soon begins to spiral out of control, and there were several times when it becomes clear that Alex wasn't truly living life to the fullest like he thought. I hoped for more exploration of his grief and how it affected his decision making.

When Lexi was introduced, I was so surprised that she and Katie became good friends. It's so easy to write female characters who hate each other, and it was refreshing to see a real friendship between these two. There was a subplot here that I won't spoil but will say I wish it had been delved into. So, would it be too much to ask if Lexi can get her own book??

So as I mentioned earlier, it isn't a spoiler to say we know from the beginning how Alex and Katie feel about each other, but I would've preferred to be kept in some suspense. Nevertheless, Playing Her Secret Crush kept my interest, and I enjoyed the gaming aspect of the story. I believe the characters will stay with me even if the plot may not.