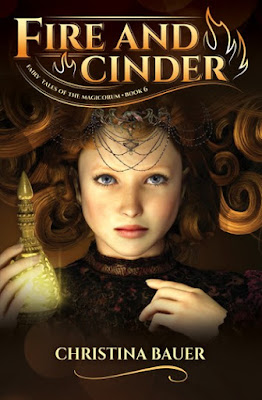 Series: Fairy Tales of the Magicorum #6

Meet the Magicorum: modern folks who are supernaturally locked into fairy tale life templates. For eighteen-year-old Elle, that role is Cinderella. Meanwhile, Agatha is her evil stepsister. Things go downhill from there…
Cinderella On The Run
Elle—never call her Cinderella—has found the love of her life in Alec Le Charme, the prince of a jewelry dynasty. But when Alec gets spirited away, Elle must ditch her Manhattan home for the perilous Faerie Lands. To save Alec, Elle must also swap her glass slippers for a flying carpet. But will switching templates from Cinderella to Aladdin snap Elle’s sanity?
Whatever. Bring on the straight jacket. Elle is one Cinderella who’s determined to save her prince, no matter what.
Evil Stepsister or Elf Queen?
Agatha always accepted her role as Elle’s evil stepsister. Then her life template changes from nasty sibling to evil elf queen. Agatha has one thought on that score. Thanks but no thanks. Agatha refuses the regal life, even though stepping away from her crown means ignoring her lifelong attraction to the elf prince, Jacoby.
Then everything changes. Agatha discovers that Elle’s life is at risk… and the only way to save her Cinderella is by teaming up with Jacoby. Trouble is, that’s a lot of togetherness. Working with Jacoby could easily end in disaster, not only for Agatha’s heart, but also for Elle and Alec’s lives.
Fairy Tales of the Magicorum
Modern fairy tales with sass, action, and romance
1. Wolves and Roses
2. Moonlight and Midtown
3. Shifters and Glyphs
4. Slippers and Thieves
5. Bandits and Ball Gowns
6. Fire and Cinder
7. Fairies and Frosting
8. Towers and Tithes

Fire and Cinder, the sixth entry in the Fairy Tales of the Magicorum series, took me on another roller coaster ride filled with new discoveries that advanced the plot. Every new piece of info that was revealed was exciting, and I couldn't wait to see what the characters would have to face next.
Like the last book, Fire and Cinder is also told from four perspectives--those of Elle, Alec, Jacoby, and Agatha. Before I dove into this one, I reread the fifth book, Bandits and Ball Gowns, which took me no time at all. I fall into these books so easily, and I wanted to make sure I hadn't forgotten anything that happened previously before I read this current installment.
Everything I learned about Agatha was further expanded on in this book, and she was firmly rooted in the middle of the action along with Jacoby. One of my favorite parts was that the fairy tale templates these characters are kind of forced to live out can change, and I thought that was creative and well thought out. The new characters both from the last book and this one were welcome additions, and I even liked a couple of the characters on the "bad side."
The only reason I've rated this four stars instead of five was again how easily the battle against the "big bad" was won. Also some of the chapters were very short. I don't mind short chapters, but some of these were only a page to a page-and-a-half.
Overall, I devour my way through this series, and I can't wait to read the next book!
Check out my reviews of three earlier books in this series:
click here for my thoughts on Wolves and Roses (#1)
click here to read about Slippers and Thieves (#4)
click here to read my review for Bandits and Ball Gowns (#5)

Thanks for visiting
Donnie Darko Girl!