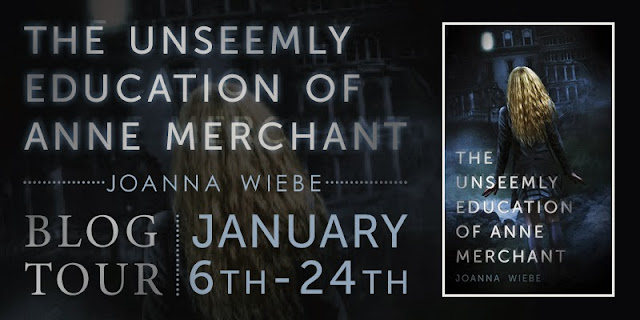 Hey guys! I'm so excited to be hosting a stop for The Unseemly Education of Anne Merchant Blog Tour hosted by Kismet Book Touring.
The full tour schedule is at the bottom of this post. Click here for more information about each of the blog tour stops. 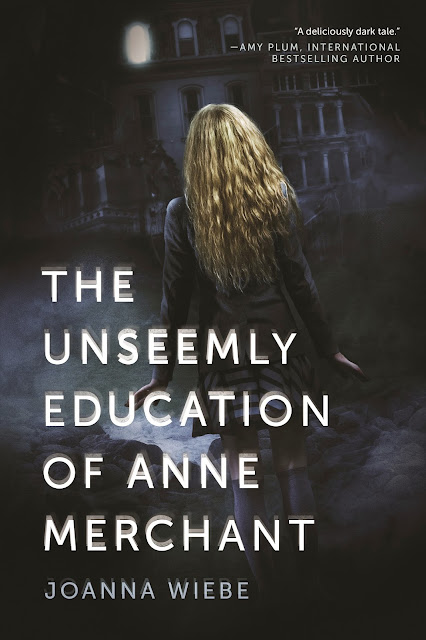 After her mother's death, 16-year-old art prodigy Anne Merchant moves from sunny California to the cold woodlands of Wormwood Island, Maine for what is supposed to be a fresh start. She is the newest student of Cania Christy, an elite boarding school that is as filled with secrets as it is with the world's most privileged - and competitive - teens.

From the first day of school, Anne finds herself thrust into the Big V competition, an intense race to the top of the class. With enviable talents, she quickly becomes the enemy of every junior seeking the Big V - especially Harper, the presumed frontrunner.

Like every student, she is assigned a guardian, and a unique mission. Anne's assignment is to "look deeper." Anne is determined to succeed, and won't let anything - not even her distractingly beautiful neighbor Ben - get in the way. But the deeper she looks the more questions arise, and the more she is forced to reexamine all of her assumptions - about the school, her classmates and even herself.

As layers of secrecy deepen, Anne leans on the friendship of Molly, a lifelong islander, and Pilot, the only junior not competing for the Big V, to make sense of this cloak-and-dagger world. But when people start disappearing, Anne uncovers a stunning truth that she must face head on - before she and everyone she loves is destroyed by it.

How I Arrived at the Title for My Book

I am masterfully bad at dreaming up titles for the stories I write. Masterfully bad. As in I could teach a graduate-level course called How Not to Title Your Story. Which probably isn't a good title for a course.

But that's not the worst part.

The worst part is that I actually loooove my awful titles. I openly, passionately believe they're really good. (Delusion is a defense mechanism for writers. Or at least for me.) I was surprised in my undergrad writing class to hear a few students comment on how bad they considered my short-story titles, like "There's a Hole in My Boat" and "Prep School Boys' Last Chance to Dance", to be. After all, who doesn't like a long title? A literal title? A title that matches the voice of the story you're about to read? Evidently, quite a few people.

In the world of YA novels, my favorite titles are dark and length, and they generally feature startling visuals or a little poetic alliteration. Like The Forest of Hands and Teeth, The Mirk and Midnight Hour, and Between the Devil and the Deep Blue Sea. Long, dark titles that take up the whole cover. Beautiful.

I wasn't the one who came up with the name for my novel, The Unseemly Education of Anne Merchant (Jan 14) - which is long and slightly dark - but I did come up with a boatload of options that were shot down. Let me entertain you briefly with a handful of them (and tell me in the comments if you think they're total crap):

So if I didn't come up with The Unseemly Education of Anne Merchant, who did? It started with yet another late-night brainstorming session with my husband Lance, who's both patient and creative (which are important qualities when naming; I lack the former).

He suggested, after I'd listed off a few doozies, The Education of Anne Merchant. It reminded me of one of my favorite albums from my high school years - The Miseducation of Lauryn Hill - so I thought I'd propose it to my editor Glenn.

Glenn liked it, too, but he noted that it could be improved with an adjective. He proposed the following:

I loved Unseemly as a word. It's a seldom-used and rather dark word, which I dig.

And thus was born the title. Not of my mind, but of the indirect collaboration of my hub and my editor.

This is not the first book that has endured countless trips to the Naming Factory, countless spins of the Naming Wheel. Like most writers, I take comfort in knowing that other writers have been through what I'm going through - from naming books to dealing with rejection - so let's take a look at a few books that might've been called something else, had clearer heads not prevailed...

Stephenie Meyer submitted Twilight to agents under the name Forks.

Pride & Prejudice was rejected by a publisher when it was submitted under its original name First Impressions.

And the American classic Gone with the Wind was almost the pretty darn bland - but almost Bond-esque - Tomorrow Is Another Day.

There are dozens - surely 100s - of other would-be titles. Which ones are your faves? Share in the comments!

Joanna Wiebe is the author of The Unseemly Education of Anne Merchant, now available online and in bookstores in the US and Canada. Amy Plum called the novel "deliciously dark," and VOYA said it's great for fans of Anna Dressed in Blood. 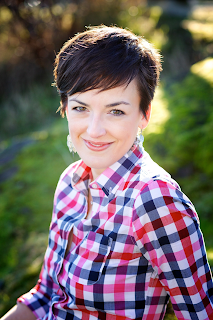 By day, Joanna is a copywriter and the co-founder of  CopyHackers.com and Page99Test.com, a critique site for published and unpublished writers. As an undergraduate student, Joanna won several academic awards for excellence in creative writing: Canada's James Patrick Folinsbee Prize, which she won twice, as well as the Godfrey Prize.

After graduating, she lived for a year on the remote northern island of Hokkaido, Japan, which is the inspiration for the verdant Wormwood Island of the V Trilogy. She holds a BA in Honors English and an MA in Communications from the University of Alberta and lives with her partner Lance in Victoria, British Columbia.

The Unseemly Education of Anne Merchant is her first novel and the first installment in the V Trilogy. 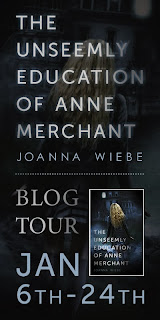 Blog Tour organized and hosted by: