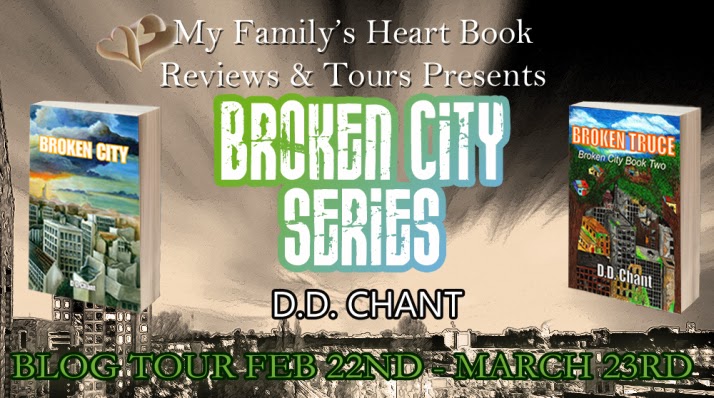 I have a review of book two, Broken Truce, and a link below the cover of Broken City that will take you to my review of book one in case you missed it. 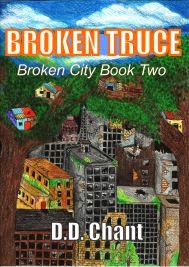 Life isn't turning out the way that Deeta thought it would. With the Lewises defeated and peace between the tribes, she'd believed that the dark times were in past.

However troubles between the tribes continue, and the Andak council has selected Tom as their ambassador and chief spokesman to the other tribes.

Deeta knows that there is still much resentment against the Andak, and that Tom is in danger every time he leaves the safety of Andak city.

Struggling with her own complicated feelings against the tribe that she is now a part of, Deeta tries to ignore the changing attitudes growing within her.

Then Tom is betrayed, and with the whole City thrown into great danger, Deeta finds that reality can't be ignored forever...

BROKEN TRUCE was released three years after the first book, BROKEN CITY, and I could tell the difference in Chant's plotting. The story and characters have grown exponentially from the first book, and there's much more action with intense moments in this installment of the series.

What I liked
I really liked the plot of BROKEN TRUCE with all of the action and intensity. The synopsis gives away very little as to what happens in this book, and I was taken by surprise in the best way possible. In writing this review, I decided I should stick with how the book made me feel and what I thought about it rather than possibly giving any of the plot away, especially if you haven't read book one yet. Let's just say I was invested in the plot and needed to know what would happen next.

Many of the characters have grown on me, including Deeta and Tom. I warmed up to both of them much more this time around, and I think part of that is they've become familiar to me and understand their personalities and ways of thinking better. I even began liking Jayden, one of the Andak brothers, and hoping for more scenes with him. He's brave in wanting to do the right thing even if he has to stand up to his brothers to get it done. I admire that about him.

What didn't work for me
As with the first book, BROKEN TRUCE also has many spelling and grammatical errors. The biggest mistakes I ran into were run-on sentences and misuse of pronouns (ex. using "you're" instead of "your"). I don't usually comment on this sort of thing because I mostly review ARCs (Advanced Reader Copies) which have kinks to be worked out before being published for sale, and this book is an ARC. However, the first book had these types of mistakes, too, and it has been out for three years which is plenty of time to fix these issues.

There are quite a few shifts in POV in BROKEN TRUCE. There's Deeta's POV in first person and Tom's POV in third person, which was also the case with the first book. Again, I found myself wishing Tom's POV was also in first person. Unlike the first book, BROKEN TRUCE has several different characters' POV's, which ended up confusing me at times. They're all in third person, too. It ended up making the story a bit jarring plus gave me a lot of characters to keep track of without much to help me differentiate them from one another - mostly, the Andak brothers.

Overall
The only two issues keeping me from giving BROKEN TRUCE a higher rater than three stars are the grammar/spelling and multiple POV's. The plot is excellent, and the action kept me excited enough to want to keep reading. The characters have grown since the first book, and they've grown on me as well. This series is a different kind of dystopian than anything I've read before, and I think if you want to read a post-apocalyptic, dystopian novel without plagues or zombies, then give this series a try. 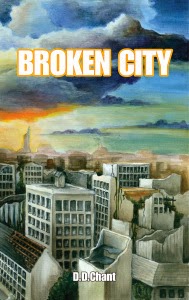 Click here for my review of Broken City, Book One.

Deeta Richards has never seen the outside world. Before she was born a banking crisis brought civilization to an end and now no one leaves the safety of the compounds unless they need to, but Deeta still dreams of seeing more than the building she was born in.

Tom is in the guard, this group are the only people that the tribal elders allow to leave the compound and Tom knows only too well that Deeta could never survive the harshness that exists outside. Then tragedy strikes and Deeta and her sister Jan find themselves captured by a hostile tribe. Why does Tom know so much about these people? And why do they know so much about him? As this mystery draws to a climax, they discover that their friend Tom is not quite what he seems... 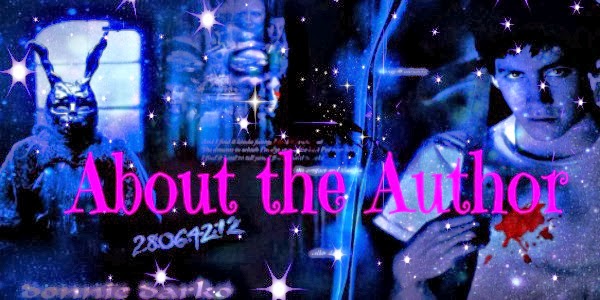 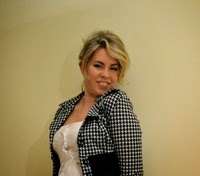 My name is Dee Dee, I'm twenty-six, and I live in a beautiful part of Devon, England with my family. I have a younger sister, Amy, who is a brilliant guitar player, some chickens, duck, geese, pheasants, a cat (that adopted us when we moved in!!!) and some Koi.

BROKEN CITY is actually my second novel. My first, as my Aunt so delicately put it, was crazy but in my defence I was only sixteen at the time. On the plus side I learnt a lot (or so I hope) and two years later BROKEN CITY was finished. Due to the support I have received from everyone I have just finished the next book in the Broken City series!

I really hope you enjoy reading my books as much as I enjoy writing them.

I love reading and have a Kindle: I read almost anything with adventure and romance in it! I also like to cook and wear impractical high heels!!! And as you might have noticed I have a horrible addiction to exclamation marks!!!