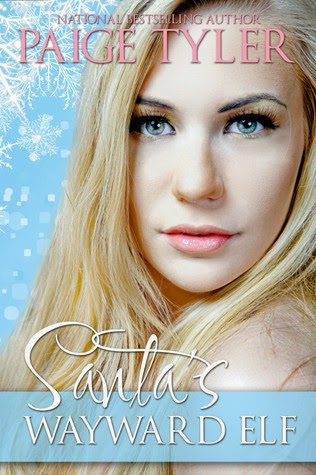 NOTE: This book has a guileless elf heroine you can't help but fall in love with, a hunky hero who knows how to come to a girl's - er, elf's - rescue, some serious kissing under the mistletoe and lots of steamy hot romance!

Being one of Santa's elves isn't all sugar plums and candy canes.

At least not for Sosie. Taller than the other elves, she's always had a problem fitting in at the North Pole, so when the transport sled she's on breaks down in New York City on Christmas Eve, she can't resist slipping away to explore the world of the "big people." While she's having fun, the transport sled takes off, leaving the naiive elf stranded.

Fortunately, handsome police detective Derek Clayton comes to her rescue, offering to let her stay at his apartment. Having heard horror stories about the big people, Sosie is both surprised and relieved to meet such a kind, sweet man. Not to mention one so gorgeous and well-built.

Even though Sosie expects the North Pole to send out a search party any day, she finds herself falling for Derek anyway. She desperately wants to tell him she's an elf, but knows he'll never believe her. When the lies and omissions start to pile up, Derek can draw only one conclusion - Sosie is working for the mob boss he's been after for years.

Just when things seem like they can't get any worse, the chief of elfin security shows up to drag Sosie back to the North Pole. How is a runaway elf supposed to overcome a determined security elf, dangerous mobsters and a suspicious boyfriend all while keeping her pointed ears secret?

SANTA'S WAYWARD ELF was a fun and imaginative read with lots of hot sex that made me blush. Paige Tyler's fresh take on elves, Santa, and the North Pole was entertaining. Sosie is an elf who isn't like the other elves - she's taller than all of them and isn't happy living in the North Pole any longer (where she makes sex toys by the way). And I thought only children's toys were made up there, lol! She's heading to the South Pole at her request when the transport sled she's on breaks down, and that's where her adventures begin.

Sosie is the kind of character you'll like right away. She's cute with her wide-eyed innocence and love of all things fun. While she was an outcast at the North Pole, she's seen as very gorgeous among humans. I couldn't help but worry about her trying to navigate her way among humans due to her lack of knowledge about our world, not to mention the fact that she's too trusting though the North Pole news makes elves think humans are violent and dangerous.

While Sosie is very naive, she's really experienced in bed. A lady in public, a tiger in the bedroom - every guy's dream, right? I couldn't help but roll my eyes at that a bit. While the sex scenes were super hot, her sexual expertise didn't seem to go with her personality. But there was also a lot of sweet romance. I did like Sosie and Derek together - they not only had sizzling chemistry but also could spend time together hanging out and having fun. They went well together.

I just wasn't that into Derek. I liked him in the beginning, then I didn't like him. I ended up liking him again later but not as much as I did in the beginning. If he's such a great guy like everyone he knows tells Sosie, why did he let himself get so easily talked into thinking she was this terrible person? It was obvious to me that she wasn't secretly working for a notorious mobster and not just because I knew her side of the story before he did.

I liked him, I just wasn't in LOVE with him. He is a good guy, but he turned ugly to me when he hurled insult after insult at Sosie. He took out his problems on her, and while that's a very human thing to do, it just wasn't right. She's so innocent! She doesn't know what so many things in the human world are called or used for - I don't know how he could have thought the worst of her. Okay, enough ranting, lol.

Overall, I enjoyed SANTA'S WAYWARD ELF. It's the perfect story to read anytime of the year. I particularly liked reading this book on a cold winter's day snuggled up in a warm blanket, but I'd read this any day of the year. Sosie is a fun character to get to know and hang out with, and the situations she gets into will make you laugh out loud. She just made the book with her spunk and hope that everything would turn out all right.