Fun or None? Top Tuesday 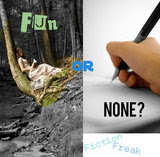 Day 3 of Fun or None hosted by Nikki @ Fiction Freak !

1. Smashing Pumpkins Mellon Collie and the Infinite Sadness
There's no way I could not list the very first "real" concert I went to!! My friend's dad took us and two of our other friends (we weren't even old enough to drive yet!), and he fell asleep while sitting next to us!! I'll never forget how the show started--the lights were turned off, and in the darkness, you could hear "Mellon Collie and the Infinite Sadness" playing, the first song of the entire album. At the end of the song, suddenly, the band was lit up, already on stage, and went right into "Tonight, Tonight." One of my best memories ever.

2. Alanis Morissette ~ So-Called Chaos
For my sister's birthday in 2004, I took her to see Alanis in concert when Alanis was promoting her album, So-Called Chaos. I was 14 when I first saw the music video "You Oughta Know" on MTV, and from then on, I was obsessed! ;) I had long hair like hers, I knew every song, I had her moves down, and my friends nicknamed me "alanis" (we never capitalized the "a" for some reason).  My sister loved her music, too, thanks in part to me, and while we love all of Alanis's albums, So-Called Chaos had us as excited as Jagged Little Pill did back when that album came out in 1995. Most of the material she played was from those two albums, and that concert more than made up for the fact that I didn't get to see her when she toured for Jagged Little Pill. I loved her primal ferociousness and edginess--Alanis made a huge impact on alternative rock of the 90's for women, and she continues to make a major impact on me! :D

3. U2 ~ All That You Can't Leave Behind
When I finally got to go see U2 in concert with one of my best friends (and partner in U2 lovin' crime), they were on their Elevation tour with a stage shaped like a heart. What I wouldn't have given to have been inside that heart!! But to see Bono, the Edge, Adam, and Larry dancing, playing, and performing their show with such energy, and completely infusing us, the audience, with that energy--what can be better than that?  Just to be in the same room with them was enough to make my day! Nothing is better than when a band comes together to bring their music to life, and you happen to be in their presence.

4. Green Day ~ American Idiot
Green Day is one of the hardest rockin' bands out there and inspires me with their lyrics of social justice and peace. My husband and I went to this concert together, and my sister went separately with her friends. This was an album that many fans of Green Day's earlier albums did not like, but American Idiot was like a salve for those of  us who were shocked and appalled that George W. Bush had been "re-elected" and spoke to me in a way that gave me hope when, at that time, I had none for this country. Billie Joe, Mike, and Tre Cool played their hearts out, and we were right there with them. They give a high energy show, and they're one of the best known bands for their awesome performances.

5. The Beastie Boys ~ Hello Nasty
I had tickets to this concert along with a few of my friends, and Rage Against the Machine was also headlining. We had been dying to see both bands, especially the Beastie Boys. The entire tour was canceled when the drummer Mike D suffered serious injury from a bicycle accident (he needed surgery and rehabilitation afterwards), and there were a group of friends here in Ohio positively devastated! By the time Mike D was well enough to perform again, Rage Against the Machine had disbanded, and the tour was not rescheduled (this happened back in 2000). I know if we had been able to go to that concert, it would've definitely been the craziest, most memorable time any of us could've had.
On May 4th of this year, Adam "MCA" Yauch died after battling throat cancer for three years. His positive energy and crazy talent will be missed.

Email ThisBlogThis!Share to TwitterShare to FacebookShare to Pinterest
Labels: fun or none, music