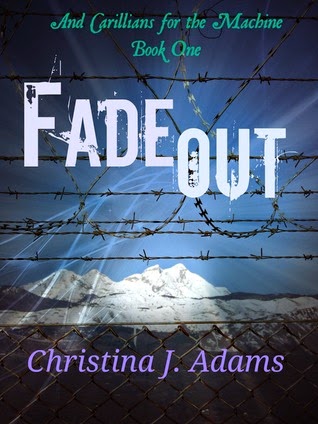 Thirteen-year-old Silas fears the day when guards come and remove his memories leaving him an empty shell. He is trapped in the Cartiam, a human farm, and knows escape is not possible, but he can't stop thinking about it. Especially when his older sister Malina is terrified her time will be coming soon. Ever since he was separated from his parents, Malina has taken care of him and now it's Silas's turn to protect her. He has to escape and take her with him.

But when the owner comes to visit, things go from bad to worse. Jamar, the owner's son, singles Silas out and the extra attention brings Silas under the owner's microscope. The other kids in the Cartiam are unhappy with the way they are treated and rising emotions threaten to ruin all of Silas's plans. Yet worst of all, Malina herself isn't sure she wants to hang on. It is up to Silas to figure out the escape and fast. If he fails, he could lose everything he loves.

Just reading the words "human farm" in the synopsis of Fadeout makes me shiver, but that's exactly what the Cartiam is - the place where Silas and his older sister Malina are forced to live from the time they are eight years old until their memories are harvested. The Cartiam's environment becomes even more unsettled when the owner and his son, Jamar, arrive.

I wanted to love this book after reading its synopsis, but a few issues I had with the story kept me from fully embracing it. One of those issues was the main character Silas himself. He had zero personality and fell flat for me. I liked him enough to want him to be able to escape with his sister but didn't like him as much as I wanted to. I understood he had to keep his emotions bottled up or risk his memories being harvested, but I needed a way to connect with him somehow.

I wanted to see him struggling more with indignation, passion, and rage stirring inside of him. All of those are emotions anyone would feel being trapped in a place like the Cartiam and being treated as less than human. Had the reader been let in on a secret emotional storm gathering in him while leaving him stoic on the outside, not only would the story still have worked, but I would have been able to care more about him and cheer him on with his plans for escaping.

Jamar, the son of the owner, is rich and spoiled with no idea what life is really like for the kids who are trapped in the Cartiam. He's ignorant about the world he lives in, which I couldn't completely blame him for that because it's how he was raised. He's brainwashed into thinking he's doing society a service. With that in mind, I did feel bad for him because he strives so hard for his father's approval but nothing he does ever seems good enough. His mother is even less emotionally available - she doesn't care he's gone all the time traveling with his father.

When Jamar chooses Silas for company, I felt like he was picking out a new toy rather than a human being. I felt less sympathy for him when he felt superior to Silas. Of course he's going to know things Silas doesn't - Silas isn't allowed to have fun or learn to defend himself.

What I didn't understand about Jamar is that once he gets to know Silas, he realizes he's brave and intelligent, which goes against what he's been taught about Silas's social class, yet he still looks down on the other members of Silas's social class. He views them as less than human and unworthy of anything except having memories to harvest, which makes him a hypocrite to me. Doesn't he wonder if he's wrong about the rest of the class, too?

Fadeout brought out sadness in me, and I felt the cloud of hopelessness and despair surrounding the kids growing up in the Cartiam. They were left to wonder when their memories would be stripped away - the parts of them that makes them who they are.